1. Purpose: This endurance test provides evidence that the dog is able to perform physical exertion to a certain degree without afterwards showing significant symptoms of exhaustion. The German Shepherd Dog is a working dog. He must be capable of strenuous work. The required strain on the physical condition of the dog can only come from running exercises. Running places increased demands on the inner organs, especially the heart and lungs and likewise on the organs of movement themselves. It also tests other characteristics, such as vitality and toughness. The ability to endure is evidence of physical health and the presence of desired characteristics. These are essential for a working dog such as the German Shepherd.

2. Eligibility: The minimum age for admission to the AD test is 16 months. It is therefore not a test for GSD puppies. The maximum age for admission is 7 years. A German Shepherd should not be over-exercised under the age of 12 months because his bones are still not fully hard until this age. Dogs must be completely healthy and in good condition. Sick dogs, dogs without sufficient strength, bitches in heat, and pregnant or nursing bitches will not be admitted. The judge must be satisfied that the dog is in good condition. Dogs which give an impression of tiredness are to be disqualified from participating. The temperament of the dog is tested before the trial in such manner as the judge determines.

3. Evaluation: Points are not awarded, but only “Passed” or “Failed”. A dog which passes will have AD endorsed on his pedigree or scorebook.

4. Terrain: Insofar as possible the test shall be conducted on roads and paths. Asphalted, paved and unpaved streets and paths are suitable.

B) HOLDING THE ENDURANCE TEST

1. The run: The dog must run on a lead (in accordance with street traffic rules) on the right side of the handler on a bicycle at a normal trot. A hurried pace is to be avoided. Light pulling on the lead is not penalised but constant lagging behind of the dog is. After the dogs have completed 8 km [5 miles], there is a 15 minute break. During this time, the judge i observes the dogs for possible signs of fatigue. Severely fatigued dogs are to be disqualified from further testing. After the first break, the dogs travel an additional 7 km [4.3 miles] before there is then a 20 minute break during which they can exercise freely and unrestricted. Before continuing the run, the judge checks the dogs for signs of fatigue or sore paws. Severely fatigued dogs, or whose paws are sore, must be disqualified from further running of the test. After completion of the running exercise there is another 15 minute break. During this time the dogs are checked for signs of severe fatigue and possible sore paws.

2. Obedience: After finishing the running part of the test, at the judge’s direction, the handler, with his dog at heel, takes up position. After being called, every participant, with his dog, has to show obedience exercises appropriate to the training level of the dog. The exercises take place with the dog on a loose lead.

On completion of the test the judge awards a pass or fail to each dog and endorses the result on his pedigree or in his score book. 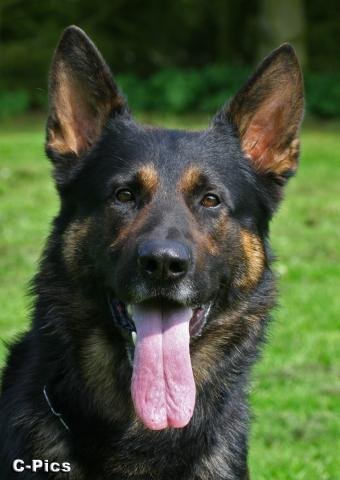