In Germany a dog must have a satisfactory hip and elbow score before it is eligible for a breed survey. Dogs with unsatisfactory scores cannot be bred from. The three pass grades are (1) ‘a’ or ‘normal’, (2) ‘fast normal’ or ‘almost normal’ and (3) ‘noch zugelassen’ or ‘still acceptable’. The other grades are fail grades and dogs with such grades cannot enter a breed survey

The HD-Zuchtwerte, referred to as the ZW, is a tool to determine the risk of a GSD to produce hip dysplasia. 100 is average hip production. The lower the number, the better the hip production. Two dogs mating are not expected to have above 100 when their ZW are added together and divided by two. So, for instance, if the mother has a ZW number of 80 and she is mated with a male which has a ZW number of 120 she would be expected to produce puppies with an average scrore of 100. Needless to say, when breeders know the ZW of their bitch and of any possible sire they are not likely to choose a stud dog with a ZW number of 120. They are likely, all things being equal, to seek out stud dogs with low scores.

The “ZW” number is recalculated every three months. It is a complicated mathematic
calculation which takes into account the hip results of ancestors, siblings, and most
importantly, the offspring. Dogs bred in Germany and registered with the SV are included in a database operated by the SV. You can go directly to the SV’s website and enter the name or SV number of the dog to find the ZW score of any dog upon which they hold data. The information is held in the section of the site headed HD-Zuchtwerte. This database makes the hip status of German dogs very transparent it has been in operation for over 40 years which has substantially reduced the incidence of hip dysplasia in German bred dogs.

Hip and elbows are also scored in England under a scheme run by the British Veterinary Association. What it is very important to understand is that screening satisfactory hip and elbows is not mandatory for breeding in the UK. Many dogs have won shows under Kennel Club rules, have subsequently then been used extensively for breeding and it has turned out that they should not have been bred from because of their unsatisfactory hip status. Because it is not mandatory for breeding and because it is actually quite difficult to track down the hip scores of, say, the grandparents of the puppy you are looking at hip dysplasia is far too common in British bred German Shepherds.

People talk in the UK of the hips of a German Shepherd ‘going’ as though it is a fact of life and it does happen frequently. It should not happen. The German Shepherd Dog is a working dog. Dogs crippled with hip dysplasia cannot possibly work. Always, always check that the parents of the puppy you intend buying have satisfactory hip and elbow scores and, if at all possible, ask the breeder about the hip scores of the grandparents too. It is easy to check this with German bred dogs because all the information is in the public domain and easily checked back for generations. It is less easy to check hip and elbow scores of all dogs in a pedigree for British bred dogs. Nevertheless, there is a good scheme for hips and elbows in the UK which is run by the BVA.

If a breeder cannot provide satisfactory information about the hip and elbow scores of both parents (and preferably grandparents) of any puppy you are considering then walk away. This should be basic requirement for any breeder and the tests are available in the UK as they are in Germany.

Take a great deal of care about this when you buy a puppy. Always satisfy yourself that the hip and elbow scores of both parents are acceptable. There are never any certainties in life but you can greatly increase the chances of acquiring a puppy which will not have hip or elbow problems if you follow this advice. You ignore it at your peril. 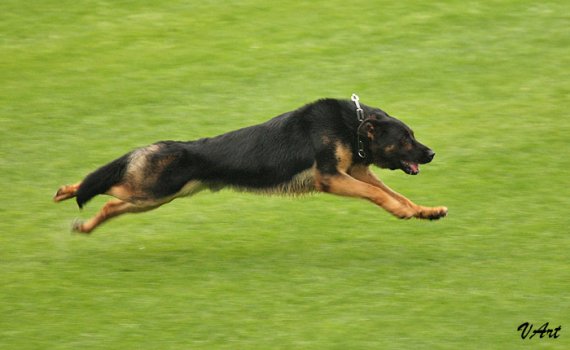