The BH for German Shepherd Dogs

BH is not exclusively for German Shepherd Dogs. It is open to dogs of any breed or, indeed, no breed. BH is an abbreviation for BEGLEITHUND which basically means ‘companion dog’. The BH test is not in itself sufficient to prove a German Shepherd’s ability to work or worthiness to breed. The BH is a preliminary test of obedience and temperament which the dog must pass before it is allowed to compete for an IPO title.

The dog must be at least 15 months of age before it is eligible to enter this test. The BH is in fact open to any breed of dog (or a dog of no breed). Its purpose is to find out whether the dog has an acceptable temperament and a minimum level of basic obedience. It is a ‘pass’ or ‘fail’ test. There are no scores. However, the test does have two parts – Part 1 and Part 2. The dog must pass Part 1 before being allowed to participate in Part 2.

The dog’s temperament is assessed by the judge at the beginning of the test and continually throughout the test. Any dog which shows behaviour which in the judge’s opinion is unsatisfactory will fail the test and be disqualified from taking any further part.

Heeling on a lead. The dog must walk to heel on a lead keeping its shoulder level with the handler’s left knee during a pattern involving an about turn, right and left turns and changes of pace. This done with the dog and handler on their own in the first instance. Then the same exercise is repeated through a group of people. While it is going through the group of people the dog must continue to walk to heel and be attentive to its handler.

Heeling off lead. At the direction of the judge the lead is removed from the dog and the dog perfoms the same heeling exercise alone with its handler and again through a group of people. The dog should remain at heel and attentive to the handler throughout. At some point shots will be fired from a starting pistol. The dog must remain indifferent to the sound of the gunshot. A dog which shows any sign of fear of the sound of the gunshot must be excused from the trial immediately.

Sit. While heeling the dog the handler instructs the dog to sit. The dog must sit immediately. The handler continues walking in a straight line and after about 10 paces turns to face the dog. The dog must remain sitting. At the judge’s direction the handler goes to the dog and stands next to the dog which remains in the stationary sitting position at heel.

Long down. The handler must command the dog to lay down in a spot chosen by the judge. The handler then walks approximately 40 paces away with his back to the dog but still in sight of the dog. The dog must remain in the down position while another dog goes through the above six exercises.

Part 2 is a traffic and people test. Only dogs which have passed Part 1 will be permitted to take part in Part 2.

Ability to cope with traffic. The dog is taken to a public road or walkway where he will walk to heel through pedestrians, pass cars and encounter bikes and joggers. The pedestrians, bikes and joggers are volunteers, not strangers. At the end the handler walks with the dog to heel to speak to the judge, shake hands and converse with him. The dog must remain calm and indifferent throughout. A fearful dog must be dismissed from the test.

Performance in traffic. On a public road or walkway the dog is walked to heel on a lead and at the judge’s direction must sit and down promptly. The dog must remain indifferent to traffic and distractions.

Tied out. On a less busy pavement or walkway the dog is tied to a suitable object away from traffic and the main flow of people. The dog may be left standing, sitting or in the down position. The dog is then left for approximately two minutes as the handler walks out of sight. Another person (a volunteer, not a stranger) then walks past the dog with a non aggressive dog on a lead. They will pass with approximately 5 paces. The dog must remain calm and must not react in an aggressive way. The handler then rejoins his dog. 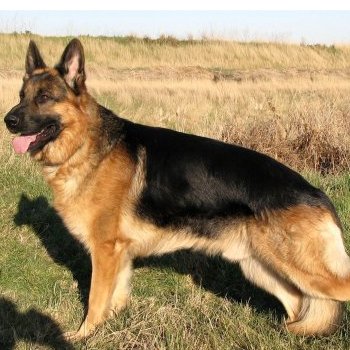