The German breed survey or Körung can be taken in England. We understand the first one took place in 2010 and they do now happen on a regular basis. The Körung is carried out by a judge appointed by the SV or Verein für Deutsche Schäferhunde, the German home club responsible for the standards of the breed worldwide, and the Körung is recognised throughout the world. Most serious breeders in the UK do in fact send their dogs to Germany to take the Körung because the examinations take place much more frequently there.

Now, in the UK there is the Breed Survey scheme run by the Breed Council and so if the parents of the litter you are looking at do not have the German Körung they should, as a bare minimum, have a British Breed Survey. We say, ‘bare minimum’, because strictly speaking the British Breed Survey is not directly comparable to the German Körung and it is does not have the same recognition. The reason for this is because it is not so comprehensive and dogs do not have to have a schutzhund title in order to take it. This is a mistake because it is the schutzhund title which establishes whether a dog can really work and whether it has the temperament and character necessary to do so safely. It is also fair to say that dogs which are over the breed standard in size can get a grade of pass in a British Breed Survey.

Nevertheless, a British Breed Survey is considerably better than nothing. If a breeder cannot show either a German Körung or a British Breed Survey for both mother and father of the litter you intend to buy from then you are not looking at a top quality litter. The mother and father may still produce strong, healthy puppies if they do not have a breed survey or Körung but the more items you leave out of the list of seven on the right the greater the chances that you will be buying a sub-standard puppy. Whatever you do, never compromise on item 3. Both parents must have satisfactory hip and elbow scores. If you do nothing else then at least insist on this.

You may be puzzled as to why we have not mentioned any of the factors you usually read about when you read advice about choosing a puppy. ‘Choose an alert, confident, puppy which does not withdraw from you’ etc etc.

Please continue in order to read more about that. 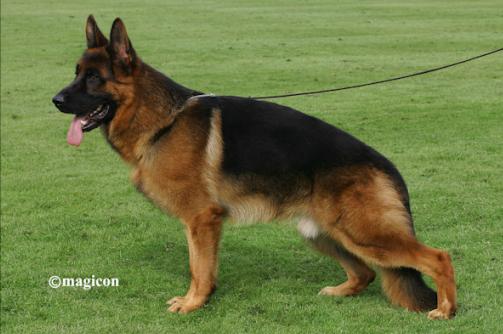