If you buy a German Shepherd puppy then item 6 – the show result of each parent – often seems the least problematical because breeders will be quick to tell you that father or grandfather was Best in Show runner up at Crufts, minor puppy winner at the Anytown Show or whatever. Treat these things with caution and do not be blinded by them. The show results of both parents are significant but they should not be the single factor which determines whether you buy a German Shepherd puppy from a given litter or not.

One point to keep very firmly to the forefront of your mind is that if the parent of this litter does not possess the items numbered 1 to 5 in the list on the right then whether that dog has won minor puppy this or is supreme champion that does not amount to a heap of beans. What it is very important to understand is that in the UK it is not necessary for any German Shepherd to have passed any health check or to have any schutzhund title in order to win a show held under Kennel Club rules. Dogs which have turned out to have had bad hip scores or which have had any number of other health defects have won such shows. Dogs which only have Kennel Club show wins to commend them are to be avoided if they do not also possess the attributes numbered 1 to 5 and 7 in the list to the right. It is difficult to overemphasise this point. Do not be blinded by show wins – especially if they have been held under Kennel Club rules.

Having said that, if a dog does possess all the other qualities listed on the right then a show result has significance. It has significance because it is all very well a breeder saying that the parents of the litter are wonderful dogs and perfect examples of the breed standard but how do you know that they are unless they have a satisfactory show result which has been awarded by a judge who is a third party? And why buy a German Shepherd puppy from a litter where both parents are not demonstrably good examples of the breed standard? Why should one buy a puppy from a litter where one of the parents has floppy ears or has a white nose? It makes no sense. Within this context the show results of both parents are important but do not be blinded by them. They must be seen within the context of the other requirements of this list. 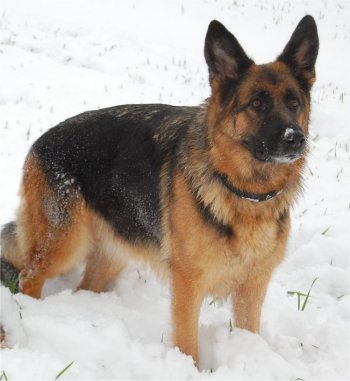